Sign up to receive recipes and news of upcoming classes 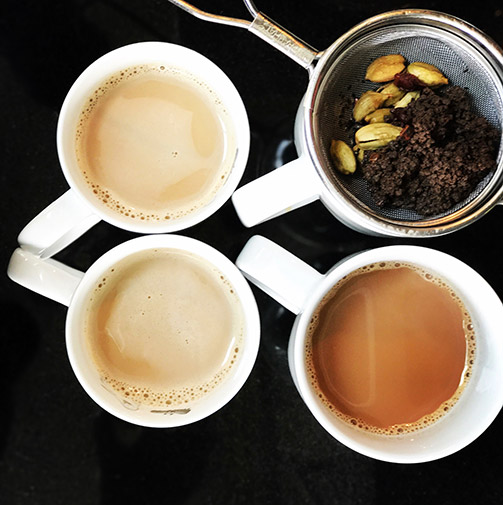 So many of you have enjoyed and loved the ‘Masala Chai’ I serve as a welcome drink in my classes, so I thought I would dedicate a blog to this iconic beverage that has been the constant for me across many treasured friendships, conversations, adventures and through times rough and smooth. I couldn’t think of a drink more symbolic of Indian culture and way of life and come rain or sunshine, I am always comforted in the knowledge that my cup of chai is never too far away! This drink is a great leveller which brings people together in so many different ways and when in good company I just seem to loose count of the cups. Chai for me is not just a drink but an opportunity to steal a little time for myself, still the mind and simply take life one cup at a time.

Why is it good for you?

Heading into autumn this is the perfect time to embrace chai as the whole spices are packed with anti-inflammatory and anti-oxidant properties, improve digestion, help fight flu and beat fatigue. I also believe that tea is the finest solution to nearly every catastrophe and conundrum that the day may bring so there is enough good reason to go ahead and brew your cup of chai!

What goes into making the perfect masala chai?

As with most Indian dishes, masala chai can be made in many different ways using various combinations of spices and methods. The foundation spices however remain the same and include green and black cardamom, star anise, clove, cinnamon and black peppercorn. Fennel seeds can also be added which are great for digestive health and lend a beautiful aroma to the chai. I sometimes use freshly grated ginger as well which works wonders when down with a flu or a sore throat. I also gently crush the whole spices in a pestle and mortar to release their flavour and oils before adding these to boiling water. Masala chai is strong bodied with bold flavours of the spices and tea leaves so I always recommend using good quality whole milk for a rich creamy taste.

In the 1830s, the British East India Company was getting increasingly concerned about the Chinese monopoly on tea as over 90% of the tea consumed in Britain was sourced from China. The British colonists noticed the existence of Assamese tea plants in India and began to cultivate tea locally. As a result, by 1900 the market share of tea sourced from China had dropped to only 10% and replaced by tea grown in British India and British Ceylon (present day Sri-Lanka).

Also, historically Indians viewed tea as an herbal medicine rather than as a recreational beverage. In order to increase tea consumption locally, the (British owned) Indian Tea Association ran a promotional campaign in the early 20th century encouraging factories, mines and textile mills to provide tea breaks for their workers. They also supported the growth of independent chai wallahs (tea vendors) throughout the expanding railway system. The rest as they say is history and masala chai came to be known as the most popular beverage across India.

This website uses cookies to improve your experience while you navigate through the website. Out of these, the cookies that are categorized as necessary are stored on your browser as they are essential for the working of basic functionalities of the website. We also use third-party cookies that help us analyze and understand how you use this website. These cookies will be stored in your browser only with your consent. You also have the option to opt-out of these cookies. But opting out of some of these cookies may affect your browsing experience.
Necessary Always Enabled
Necessary cookies are absolutely essential for the website to function properly. This category only includes cookies that ensures basic functionalities and security features of the website. These cookies do not store any personal information.
Non-necessary
Any cookies that may not be particularly necessary for the website to function and is used specifically to collect user personal data via analytics, ads, other embedded contents are termed as non-necessary cookies. It is mandatory to procure user consent prior to running these cookies on your website.
SAVE & ACCEPT